Terren is a graduate of Oral Roberts University and has been in full-time ministry since his graduation in 1999. Through his creative delivery style, it's Terren's desire to share a message that leads people into an experience with Christ in a relevant and personal way. Terren's mission is to advance, encourage, and model hope. Shinista began singing in church at 4 years of age and has been passionate about using her gift to lead people into praise and worship ever since. After attending Southwestern Assemblies of God University, she married Terren and became a licensed cosmetologist. Shinista's mission is to creatively express, inspire, and release joy in others. Terren and Shinista are the Founding/Lead Pastor's of Life Church with campuses in McAlester & Wilburton, Oklahoma and an Online Campus at lifechurchok.com. They are the proud parents of two beautiful children, Gabriella and Zion. June 2, 2002, Terren and Shinista followed the call of God upon their lives to plant a new work that would reach people with God's love. Since it's launch, Life Church has grown from 56 to a weekly average of nearly 1,000. No matter the age, the ministries of Life Church are designed to lead people into a personal connection with Jesus Christ. 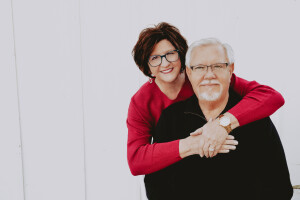 The Stanford's bring to Life Church over 30 year of Pastoral Ministry. Keith attended Southwestern Assemblies of God University. He has pastored 5 churches including, 3 years in Berlin, Germany. Keith was Oklahoma Christian Education Director for the Assemblies of God for 11 years. Serving as Executive Pastors, the Stanford's minister to the congregation and Southeastern Oklahoma through pastoral care, ministry development, and staff relations. It is the desire of Life Church and the Stanford's to reach the lost, the hurting, and the needy with the message of Jesus.

Brittany and Orlando went through a Ministry program together called Master’s Commission. There they encountered full hands-on training as well as a deeper knowledge and wisdom of scripture under the direction of Pastor Josh Mayo and Craig Johnson. Brittany was vastly involved with worship. Her hearts desire was for people to experience the presence of God. Orlando was involved with community impact. His heart was to show them the love of Christ through relationships. Both were leaders of a youth small group. They were married in August of 2013. Shortly after, their small group came to and end, and they felt God was beginning to call them in a new direction. Both felt God was placing children’s ministry on their heart and with the given opportunity they moved to McAlester in August of 2014 to become the Directors of Children’s Ministries. They believe in the next generation, and want to do all they can to build them up in the knowledge and wisdom of Jesus Christ.  In August of 2018 they transitioned to Directors of Student Ministries with Orlando serving as the Youth Pastor and Brittany serving as the Ministry Assistant. Brittany has also plays a huge role in our Media Department as the graphic designer, videographer, along with handling our Social Media accounts.  They have also added to their family a beautiful baby boy, Boston Enrique Galvan.

Jarrett Adams has been a volunteer in the Media Department at Life Church since 2010. In January of 2017 Jarrett joined the staff to fill the vital role helping Shinista Anderson as Assistant Director of Worship.  Jarrett serves as the lead on all of the creative Holiday services that occur at Life Church. Jarrett has spent the last 10 years pursuing his love for music and theatre. Jarrett received his Bachelor’s in Music Education through ORU and is currently employed full time as a Band Instructor with McAlester Public Schools.

Danny is originally from Woodward, OK where he was born and raised. He has been involved in ministry since 2002 when he was one of the Youth Pastors for the United Methodist Church of Carrollton, MO. Danny also served as the Lay Speaker for the church and traveled around the Heartland District of the United Methodist Church filling the pulpit when needed. After moving to McAlester in 2009 Danny quickly became involved with the Student Ministry at Life Church as a volunteer. Danny joined the staff in 2012 as the Media Director and enjoys every aspect of the ministry. Danny has two young daughters named Camry and Cady.  In his free time Danny enjoys time with his family along with hunting, fishing, and golfing.